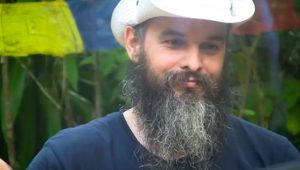 It is not an easy task to map more than twenty years of Guru Jara´s spiritual work with people. The diversity of his activities is quite wide. Hundreds of seminars and public lectures, dozens of spiritual pilgrimages with his disciples, countless consultations and personal teachings with students from all over the world, art exhibitions, spiritual festivals, and especially, the creation of entirely new concepts of doctrines adapted to the contemporary man. All of these are only few of the steps on his spiritual path, in which he proves that enlightenment is still possible in this day and age.

In the following lines, you will discover at least the crucial milestones on his mission of a spiritual teacher.

After his Initiation, the already enlightened Master accepted the commitment to pass his knowledge onto spiritual seekers from the general public. His mission was and still is to bring people as close to God and enlightenment as possible. The time was, thanks to President Vaclav Havel, very convenient for spiritual development, so he decided to return to his native country, which he left in 1989 due to a totalitarian regime imposed by a communist government.
This period was a real blessing for his Czech students, whose number grew exponentially. They could see the Master on lecture evenings, meetings in close circle of believers, personal consultations, weekend seminars and multiday events, such as annual Summer monastery school, or accompany him on a spiritual pilgrimage.
(Full text will be added soon HERE)

2.    ODRLICE MONASTERY and Centers of the Church in the 90s

With an ever increasing number of followers of the faith and people interested in the doctrine of Guru Jara and having a mission to lead people to meditation and contemplation, a vision to open a spiritual center appeared to Guru Jara.

At the turn of May and June 1998, the first Master’s monastery was founded, and in next years it was followed by other smaller centers of the Church, not only in Bohemia, but also in the Indian Dharmasala.

3.    OPENNING OF THE CLASS DOBARA and original supporting activities of Guru Jara

Guru Jara has always inspired his followers by his own example, which motivated them to deeper spiritual practice. For the most determined he founded a class called DOBARA, where it was possible to grow with incomparable intensity.

Significant events of the late nineties were the Master’s lecture at the Pedagogical Faculty of the University in Ostrava and the first international seminar in the Philippines.

In this period an original project ČAJODÁRNÉ PUTOVÁNÍ (Tea-giving Pilgrimage), that was mapping the level of tearooms in the Czech Republic, which were at that time widely popular places of spiritual and philosophical encounters,  had been also running.

In 1999, Barbara Durga Plaskova published the first Master´s book Pilgrims to Eternity I.  (shortcut to Library)

Apart from the flourishing projects of the nineties, there are plenty of innovations in the new millennium. One of them is the official founding of the Czech Telepathic Association.

They first and unique websites were created where students could draw on the doctrine in the period when the Master was teaching abroad. Weekend seminars turned into Spiritual Festivals, which became the basis and inspiration for other spiritual activities in the country. The ultimate weekend program of Guru Jara was accompanied by about fifty supporting programs in several Czech towns during the whole week. In the context of Spiritual Festivals, the closest students of the Master began to pass on his doctrine.

The number of aspiring followers was growing, so the Master had created a new project called ATELIER OF SOUL, within which he educated mentors of the Church to grow their professionalism so he could ensure the necessary care of believers and followers of his doctrine.

6. THE STELLAR CAREER OF THE CZECH GURU and the journal POETRIE

In 2002 an article entitled “Stellar Career of the Czech guru” was published, suggesting that the era of the Master’s work in the Czech Republic during the preceding several years reached its peak. Countless evening and weekend meetings, spiritual festivals, pilgrimages, monastic schools and varieties of original projects put Guru Jara at the tip of the Czech spiritual scene bringing much inspiration for other spiritual masters, mentors and individual seekers.

In addition to growing internet activities, the publishing of a new regular spiritual journal POETRIE started to share Master’s mission and wisdom with the general public.

The 8th Spiritual Festival got a new form of SYMPOSIUM OF ESOTERIC SCIENCES that expressed genuine expertise ongoing programs, without detracting from and ensuring continuing enjoyment and depth of meditation.

An important event of international activities and spiritual centers was the opening of KITAK in southern India, in the temple town of Hampi, for students from around the world and the establishment of the first center ATELIER OF SOUL in the center of Prague.

To provide a high level of education and offer good facilities to hundreds of believers who were interested in studying New Age disciplines, it was necessary to create a system that would enable high-quality teaching even in enormous numbers of students. With this idea, the SPIRITUAL INSTITUTE POETRIE was founded and worked with students following a university model with an elaborate system of faculties, lecturers, indexes, credits, theses, and included postgraduate studies.

Master, working almost the whole year abroad, mostly devoted himself to the creation of new know-how of teaching, which he was passing onto mentors on spiritual-study pilgrimages.

8. ASTROFOCUS® and SPIRITUAL TREKKING COURSE and The big events in the Czech Republic

In 2010, Guru Jara came back into a direct contact with his students through distance studying courses Astrofocus® and Spiritual Trekking.

In the Czech Republic, the seminars of Master’s followers under the guidance of experienced Church mentors continued. Such as ATELIER LITOMYŠL 2010 at the grounds of a beautiful castle or SPIRITUAL TREKKING 2010 led from distance by Guru Jara.

In Athens, Greece, a second EXHIBITION of ASTROFOCUS®ART was held and the following year 2011 was crucial for the Czech art lovers, who could enjoy regular EXHIBITIONS of GURU JARA promoting his initiating tantric novel CASANOVA SUTRA.

In 2011, Master invited his closest believers from his homeland to the 17th Great Pilgrimage SPIRITUAL TREKKING to join him in Asia, where it was decided to set up an Ashram.

9. THE INTERNATIONAL ASHRAM IN PHILIPPINES

With the support of friendly locals who were very supportive of the Master and his activities, the first preparations for the establishment of the center were already done at the seminar in 2011.

In the relatively short period that followed, Guru Jara managed to create a representative spiritual center which offers a high standard and original sites, features and modern technical equipment, which support all visitors and long-term students in their spiritual search and effort. The place acquired the name Rishikesh Retreat Center.

However, the most important is Guru Jara’s presence and his direct teaching for which many students and followers have been traveling from all over the world.